The craft beer has become quite popular since the last decade, and prominent companies have already increased their regional presence to increase their market share in the global craft beer market. Fact.MR reveals that the global craft beer market is likely to reach peak maturity levels, and is expected to grow at a healthy CAGR of 7% in the forecast period. This notable growth is mainly influenced by the dominance of small and independent brewers, which will significantly increase during the forecast period.
Click HERE To Get A SAMPLE (Including Full TOC, Table & Figures) At- https://www.factmr.com/connectus/sample?flag=S&rep_id=181 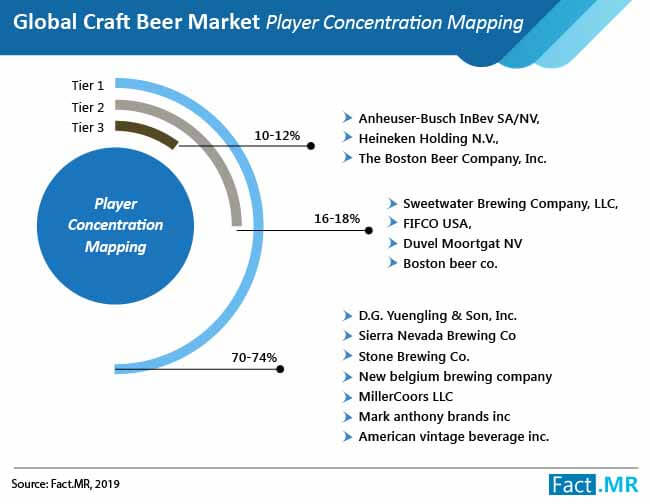 Craft brewers are already introducing craft beer in various flavors, and are focused on using advanced technology for malt ingredient production which is expected to create lucrative opportunities for the global craft beer market. A new study conducted by Fact.MR also finds that, globally, fruit additive based and unfermented craft beer have significant demand. Moreover, among various products, pale ales account for more than 25% demand in the total craft beer market. It has also been seen that more than 67% of consumers prefer to drink craft beer through independent regional craft brewing companies. The number of craft breweries in the US is increasing tremendously, mainly in California, Florida, Colorado, North Carolina, New York, Oregon, and Pennsylvania.

The quality of raw materials such as wheat, barley, and maize is a crucial factor for craft beer production. Barley and wheat offer various benefits, and produce is not restricted to a particular type or grade, and both species are known to adapt to a range of climatic conditions. Hence, the easy availability of quality raw material is also creating lucrative opportunities for the craft beer market at the global level. An increasing number of lounges and bars is also influencing the craft beer market to a great extent. Furthermore, according to the brewer’s association, the new brewpub opening has been significantly increased since the last four years in various regions.

The Fact.MR study also envisages that the craft beer market experiences intense competition from the local and domestic level layers, and is highly fragmented. Majority of the market is dominated by microbreweries, brewpubs, and regional craft breweries. International players are starving to increase their market share in the craft beer market by introducing new products with versatile packaging to attract consumers. Top companies mainly prefer to offer their products by online retailers, liquor store and brick & mortar stores. Additionally, the rapidly increasing travel and leisure industry is pushing the craft beer market on account of the fact that customers like to consume their favorite drinks on-the-go.

Full Access Of This Exclusive Report Is Available At- https://www.factmr.com/checkout/181/S

Europe is an emerging region in the craft beer market which is anticipated to show noteworthy growth over the forecast period. People in countries such as UK, Portugal, Spain, Belgium, Greece, Norway, and Sweden are preferring bars, breweries, and restaurants to socialize over a mug of craft beer. Over the next four years in Europe, many breweries will end up finding differentiated offerings in their products with clear and unique value propositions, to gain a competitive edge over other breweries.

This study underlines key opportunities in the craft beer market and finds that the market would exhibit growth at a value CAGR of ~ 7% during forecast period.